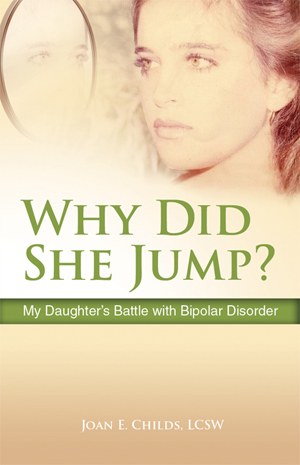 After many years of vacillating between unparalleled caring, generosity, and uncontrollable angry eruptions, Pam is finally diagnosed with Bipolar Disorder. However, due to difficulty and mismanagement of this insidious illness and apathetic attitudes within the health professional community as well as coping with her own personal demons, she ultimately jumps from a 15th-floor balcony. I chronicle not only Pam’s life but also, her own and our family’s struggle to understand this happening as well as the inadequacy of the health profession to treat this mental illness. My faith in the health system is challenged and proves a need for change.I try to give an insightful, informative, and yet sensitive glimpse into my daughter’s life dealing with Bipolar Disorder. Though my daughter’s death is the driving force behind this writing, I attempt to lead the reader through the dark days of grief and guilt of a mother as well as a frustrated professional to the acceptance of personal and filial forgiveness. I reflect on my daughter’s many accomplishments in spite of or even because of her illness. To paraphrase an old saying, this writing is the epitome of “She did not live in vain.”

For all who have been affected by the tragedies of family or acquaintances afflicted with mental illnesses and all the accompanying heartaches and troubles, I offer hope for tomorrow—no matter the struggles of today.

Book Reviews for Why Did She Jump? My Daughter’s Battle With Bipolar Disorder

Why did she jump? Hollywood mom shares her daughter’s battle with bipolar disorder

Pam passed when she was 34 years old. She was born in North Miami Beach on October 1, 1963, and appeared to be a normal, healthy, engaging, bright and precocious as a child.

“She had a charismatic personality,” shares Childs. “She was adored by her father, her siblings, her teachers, friends, grandparents, and of course me. I survived every parent’s worst nightmare.”

Childs says she had to make a choice. “Was I going to become a victim of this tragedy? Would I simply survive and move on? Or would I choose to take this loss and turn it into something that would make my daughter’s life and death meaningful and raise the conscious awareness of mental illness?”

Childs chose to be a PHOENIX, “not unlike the mythological bird that rises from the ashes to become stronger and more empowered.”

“This has become my mission,” she states. “To share my story and help others who have suffered similar tragedies, whether from mental illness or any other loss of a loved one caused by any other reason.”
– Darline Pistocchi, Hollywood Gazette | Jun 25, 2016 | Read the full review

I happened across this book as I was looking at the category of suicide on amazon this morning. Having made the decision to read no more books on suicide (I’ve read so many I’ve lost count), I came across this book and felt an urge to purchase it. There was something about it. I only very briefly scanned the preview section before I purchased the Kindle version, which is rare for me. I usually get a sample first.I purchased this book this morning and read it in one sitting (except for one meal and a few bathroom breaks) because I could not put it down. I’m an avid reader, but I have never read any book in one sitting in my life.I lost my 23 year old daughter Kaitlyn to suicide 4-11-13. She was just starting her 3rd year of medical school. Unlike the author’s daughter, my daughter never gave us one single sign that she had any depression whatsoever. One day I thought she was the happiest person on earth, fulfilling her dreams, the next day she was dead from her own hands. She wrote in her note that she had been depressed all her life, hid it from us, but could no longer bear the weight of it. She never sought help.

The author’s daughter Pamela suffered from Bipolar Type I and it was very obvious the last years of her life. Her parents did all they could possibly do to help their daughter by taking her to psychiatrists, counselors, and she was on medications, but the disease took her in the end.

Though my daughter never showed signs and her daughter did, I could relate to so many things in this book. I cried several times during the reading of it. The author has suffered all the whys and what ifs and guilt and gut wrenching pain that I have and still am experiencing.

Her daughter was gifted, bright and full of love for life, just like mine was, but as she writes, mental illness can touch the life of anyone no matter their intelligence, upbringing, race, gender or anything else.

This book was heartbreaking but it should be read because it lets one see the devastation that mental illness can have on someone and the people that love them. Also, it makes one know that these illnesses can take their lives by their own hands.

Mental illness has many forms. There are many types. Some people are able to hide it, some may not. And I’ve often (so very often) wondered had I known of my own daughter’s illness, and could have gotten her help, would she still be here? The answer is maybe yes, maybe no.

I’d like to thank Joan E. Childs for pouring her heart out in this book. I have come to know her daughter through her eyes and memories and she was a beautiful person and was so loved. Her book has truly touched my heart.
– Rhonda Elkins “Rhonda E” , July 10, 2014

A perfect read for anyone with a family history or loved one dealing with bipolar disorder or suicide. Thank you Joan for sharing your story!
_ LDJ, Amazon.com

This book should be read by anyone who’s lost a loved one due to mental illness and/or suicide. As a mother, I can’t imagine the pain Joan must have felt after losing her beautiful daughter. Her strength is inspiring.
– Nicole Rodrigues, Amazon.com, June 23, 2014, 5.0 out of 5 stars

An Angel to Remember is a book clearly written from the heart. The author reveals inner most secrets and in doing so helps to remove the shame that surrounds mental illness. The author also tells a story that illustrates how complicated mental health issues can and do become and how our society has by handing the health care system over to HMOs created a dangerous and ultimately deadly catch 22 that anyone can easily be caught in. Saying that a book about mental illness, pain, suffering and suicide was enjoyable feels wrong so I will say it was captivating, gripping, sad, motivational and a very well told story. It most certainly is a book worth reading. It’s an “easy read” and you will find yourself eager to see what happens next. I highly recommend this book.
– JK “Vegan Cook”, Amazon.com, June 24, 2014, 5.0 out of 5 stars

This is a true story of how Pamela, a young, beautiful psychotherapist, lived with a chronic debilitating mental illness and how her family got caught up in the whirlwind. It is also a story of how the mental health system continually failed her in not being able to provide her with any kind of useful assistance. Joan, her mother, was desperately trying to save her daughter’s life but the HMOs slammed the door in her face with their refusals to cover even the most basic treatment for her bipolar illness. You will see that not much has changed since then.

You will feel Pamela’s terror as she fights her demons, Joan’s desperation and frustration as she searches for help for Pamela and watch as her father and siblings stand helplessly by. This is a book for anyone who is contemplating a career in the health care field to make them aware of the challenges ahead.
– Mary E (Miami),Amazon.com, July 18, 2014, 5.0 out of 5 stars

This book is a story of a young woman’s struggle with Bipolar Disorder, and her family’s efforts first to support her, and then their grief at losing her to suicide. Joan Child’s writing allows the reader to walk beside her as she works through the memories, pain, the what if and the what could I have done differently.Readers will learn more about Bipolar I Disorder, which thankfully, not every family has to deal with, but also about the grieving process, which we do all deal with. Despite being a heart-breaking story about illness, death and grief, Joan skillfully leaves you feeling more better and actually hopeful at the end.It’s a very touching story that will make you want to reach out more to others with mental illness.
– Leslie G. Nelson (Seattle), Amazon.com | August 30, 2014, 4.0 out of 5 stars

With piercing honesty, Joan Childs peels away the layers of anguish, despair and bereavement as she mourns the death by suicide of her daughter Pam. What she finds at the core is the life-affirming love she has and will always have for her child. Her book is a must for parents and professionals alike. It is a both a manifesto and a manual.
– Hedy Schleifer, MA, LMHC

Joan’s daughter, Pam committed suicide. She, succumbed to her mental illness. One that had plagued her, nearly her entire life. Pam was bipolar and no amount of medical intervention could help her. The very system that should have saved her life, failed her time and time again.

Joan and her daughter, Pam were both trained psychotherapists and despite having in-depth knowledge of her mental illness, neither of them could save her life.

Fuel by grief and guilt, Joan has written this book, to mend her broken heart. She gives an honesty and open account on what it’s like to live with someone who has a mental illness. She re accounts the days leading up to the death of her daughter and then the aftermath.

This is an emotional and heart wrenching read.

“The disease became her executioner. It had a life force of its, own controlling her will, her actions, and causing her death.” – Joan E. Childs, Why Did She Jump? My Daughter’s Battle with Bipolar Disorder.
-Posted on www.blogger.com | Books & Reviews