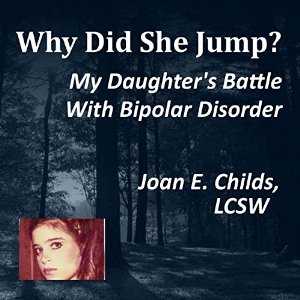 There is one day in Joan Childs’ life that she wishes she could do over: the day her daughter, Pam, a brilliant psychotherapist, plunged from a 15-story building to her death. In this vivid memoir, Childs (herself a psychotherapist) explains how her daughter’s life was taken by the most unforgiving of executioners: bipolar disorder. It was the delusions, not her daughter, who made the final decision to end her life. Read more 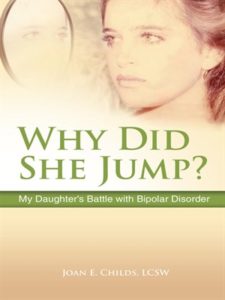 Six million people in America suffer from bipolar disorder. Joan Child’s daughter, Pamela, suffered from the disorder, bouncing from doctor to doctor in search of treatment. Yet the demons became louder, and on a summer day in July 1998, the same day that the Oprah Winfrey Show aired a segment on bipolar disorder, Joan Childs’ 34-year-old-daughter leaped to her death from the window of her father’s 15-story apartment. Why Did She Jump? is her mother Joan’s haunting story of grief and guilt, yet it is a beautiful story of love and the courage to find peace and purpose once again.

With brutal honesty and vivid detail, Joan recalls how the entire family became entangled with Pam’s illness as they watched her dive deeper into the darkness where no one could reach her. Ironically, Pam and Joan were both psychotherapists yet, with all their credentials and medical knowledge, Pam still could not be saved.  Why Did She Jump? is her mother Joan’s haunting story of grief and guilt, yet it is a beautiful story of love and the courage to find peace and purpose once again.

Why Did She Jump? Kindle Edition